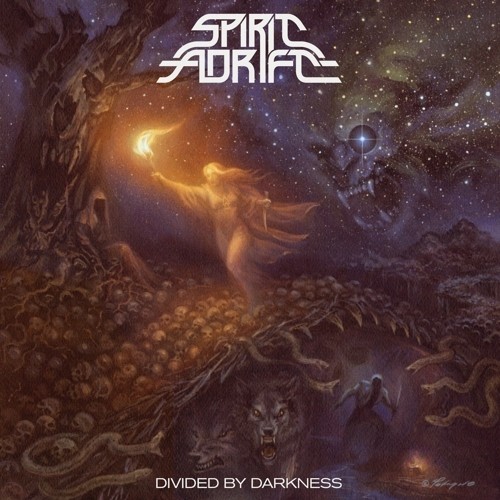 Flashback to 2017: Spirit Adrift drop their second album Curse Of Conception via 20 Buck Spin, a huge step forward following the debut, and it lands at #2 in Decibel Magazine's best albums of the year, carving out a sound now patently it's own. Lazily labelled "doom" by some, the band is in fact the true representation of what modern heavy metal should be, a direct descendent of the widely-appealing arena-filling superstars of the '80s and '90s without a whiff of anachronistic cosplay fantasies. Spirit Adrift's third album Divided By Darkness delivers on the promise first revealed on that aforementioned second and then advances far beyond it in every way, achieving a timeless piece for the ages. First single "Hear Her" pummels with the concise urgency and unforgettable chorus of a vital radio hit, while "Angel & Abyss" has the classic progression that leads from reflective ballad to rapturous anthemic triumph. The continued evolution of Nathan Garrett as a top vocal talent in modern heavy metal shines through amidst the masterful musicianship and huge production value engineered by Sanford Parker. Among the many stylistic divergences within rock and metal, this album understands that there is no substitute for huge ambition, soul-bearing lyricism, and most importantly the ability of a pristinely penned riff and impassioned chorus to alter hearts and minds. Astonishingly, this is the band's heaviest and most accessible album to date and will stand as the apex of heavy metal songcraft in 2019.